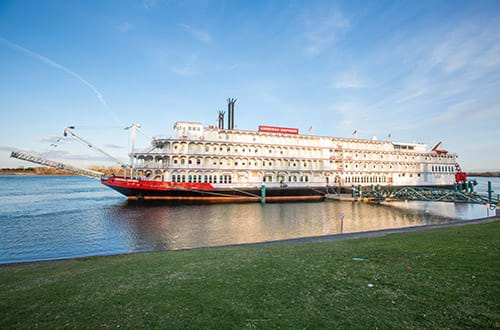 American Queen Steamboat Company – save US$1000 per couple

Fresh from being named the best river cruise line in North America at Cruise Critic’s Cruisers’ Choice Destination Awards this month, the American Queen Steamboat Company is offering savings of up to US$1000 per couple on eight-night cruise packages along North America’s historic Columbia River. The river snakes through scenic gorges and canyons and past sunburnt hillsides, spectacular waterfalls and the oldest American settlements west of the Rocky Mountains.

Journeying between the lively and beautifully located cities of Vancouver and Clarkston in the heart of US Washington State’s wine region, the cruise showcases the history and scenery of the Columbia and Snake rivers. Exclusive to Australians, the deal is valid for a range of departures in March, April May, October or November 2020, in selected cabins if booked by December 31, 2019.

Guests will cruise onboard the 223-passenger American Empress, built in 2002, which is the largest, river cruise vessel west of the Mississippi, offering classic elegance alongside modern luxuries. Boasting exceptional service, fine dining, Broadway-calibre entertainment and an impressive collection of North American regional artefacts dating back to the Gold Rush, the American Empress allows guests a glimpse of days gone by as they journey down the scenic rivers.

The cruise will allow guests to follow in the footsteps of legendary explorers Lewis and Clark, the first Americans to cross the western portion of the United States, from 1804 to 1806. The cruise also offers many onshore excursions, which allow guests to explore historic townships, such as Astoria – the oldest American settlement west of the Rocky Mountains, art galleries, unique shops and restaurants, and the Nez Perce National Historic Park, where guests can learn about the native American tribe that assisted the Lewis and Clark Expedition. The American Empress will also take guests through the famous Columbia River Gorge, lined with hidden waterfalls, rocky cliffs, wildflowers and vineyards.

With options to travel in either direction, the eight-night package includes a night’s accommodation pre-cruise, a seven-night cruise, guided, hop-on-hop-offshore excursions, beer and wine with dinner and soft drinks, water and speciality coffees throughout the cruise. The packages start from US$2535 per person, twin share, in a category C Deluxe Veranda – a saving of US$500 per person (offer ends December 31,
2019).

To book, consumers or travel agents can call the Australian representative for the American Queen Steamboat Company, Cruise Traveller, on 1800 507 777 or visit www.cruisetraveller.com.au.

PrevPreviousVoyage from Mumbai to the Med: A once in a lifetime opportunity
NextRegent Seven Seas Cruises® unveils 5 new theatre performances debuting on Seven Seas Splendor™Next
On Key