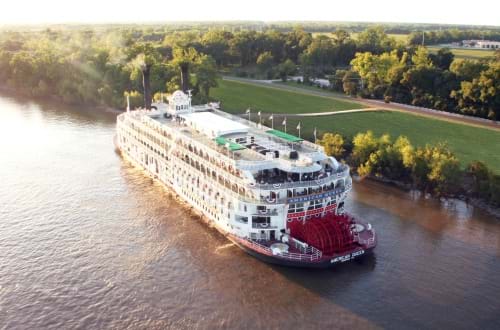 The new addition will enable the river cruise line to keep pace with demand for its popular sailings to American river port cities such as Memphis, Nashville, New Orleans, Cincinnati, Louisville, St Louis and Minneapolis.

“We continue to break sales records and incredible demand remains for more capacity on the river with each of our boats continuing to sail at full capacity,” said American Queen Steamboat Company chairman John Waggoner.

Interestingly, the new vessel will be built using the existing hull of the Kanesville Queen, a former gaming vessel built in 1995.

The contract to build the ship has been awarded to Gulf Island Shipyards, with the Countess to be worked on at its shipyard in Houma, Louisiana, from the fourth quarter of 2018.

“We look forward to collaborating with Gulf Island’s team of skilled workers and craftsmen to deliver a riverboat that will once again exceed expectations of our guests and continue raising the bar on domestic river cruising,” Waggoner said.

A delivery date for the upcoming American Countess, along with itinerary and amenity details are slated to be revealed in the coming months.