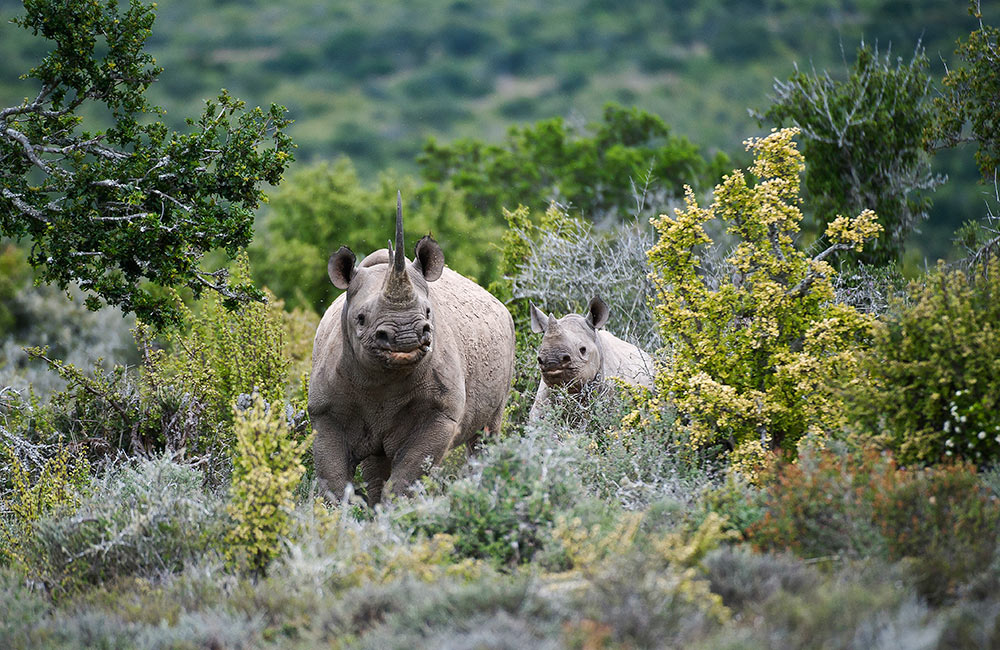 Where to spot rare & endangered species in the wild

Today, with the illegal trade in wildlife products, habitat loss and increasing climate pressures, the allure of a safari should be as much about spotting animals facing the risk of extinction as ticking off Africa’s iconic Big Five. A celebration of what conservation can achieve through regeneration, Kwandwe Private Game Reserve in South Africa’s Eastern Cape provides safari enthusiasts with an array of exceptional wildlife sightings including a high chance of viewing a number of African species that are on the IUCN Red List.

Through the wide choice of conservation focused safari activities, sightings of the Critically Endangered Black Rhino as well as the Endangered Mountain Reedbuck and Black Harrier are all very possible. Threatened species such as the White Rhino, Brown Hyena, Crowned Eagle and the Knysna Woodpecker as well as the Vulnerable Cheetah and Blue Crane are also regularly spotted thanks to the ongoing conservation work being carried out across this vast 54,000 acre wilderness.

The Blue Crane deserves a special mention as it is not only South Africa’s national bird, but also the inspiration for Kwandwe’s name (Kwandwe means ‘place of the Blue Crane’). These magnificent birds use this wilderness as a refuge, returning each year to breed, thereby also assuring guests a high chance of observing their unique rituals every September to April. Whether by 4×4, on foot or whilst on nocturnal drives guests may also be lucky enough to spot the lesser known Black Footed Cat or get a glimpse of a Honey badger.

Kwandwe grew from the belief that, without the protection of all the components of an ecosystem, natural checks and balances fail and the extinction of species increases. A core element of Kwandwe’s guiding philosophy is to provide guests with an opportunity to not only see and learn about the wide variety of wildlife found here but also to understand the complexity of a fully functioning ecosystem where biodiversity conservation gives context to the entire experience. Thanks too to the reserve’s limited number of guests (it has one of the highest land-to-guest ratios in South Africa) the highly qualified guiding team are able to spend longer exploring the wilds unhampered by other vehicular disturbances and rigid schedules thereby providing the increased likelihood of spotting so many of these declining species, and much more.

Aside from the IUNC Red List, guests may also encounter many other unusual and less common species. These include creatures such as the Aardwolf, Aardvark, Bat-eared Fox, Serval, Cape Clawless Otter, Caracal, Porcupine, Striped Polecat, Smith’s Red Rock Rabbit and even the African Hedgehog for the very lucky.

Featuring 6 of South Africa’s 8 biomes, Kwandwe’s diverse and undulating landscape is also home to an array of antelope not commonly encountered in the more traditional South African safari areas. Steenbok, Mountain Reedbuck, Gemsbok (Oryx), Red Hartebeest, Black Wildebeest, Eland and Springbok abound while more common species such Kudu, Impala, Bushbuck, Nyala and Waterbuck are also present. The result is an enormous diversity of mammals that provide guests with constant and varied interest between searches for the more elusive and increasingly rare species.

Prices from R10,370 per person per night (approx. AU$1040*) staying in either Great Fish River Lodge or Ecca Lodge.