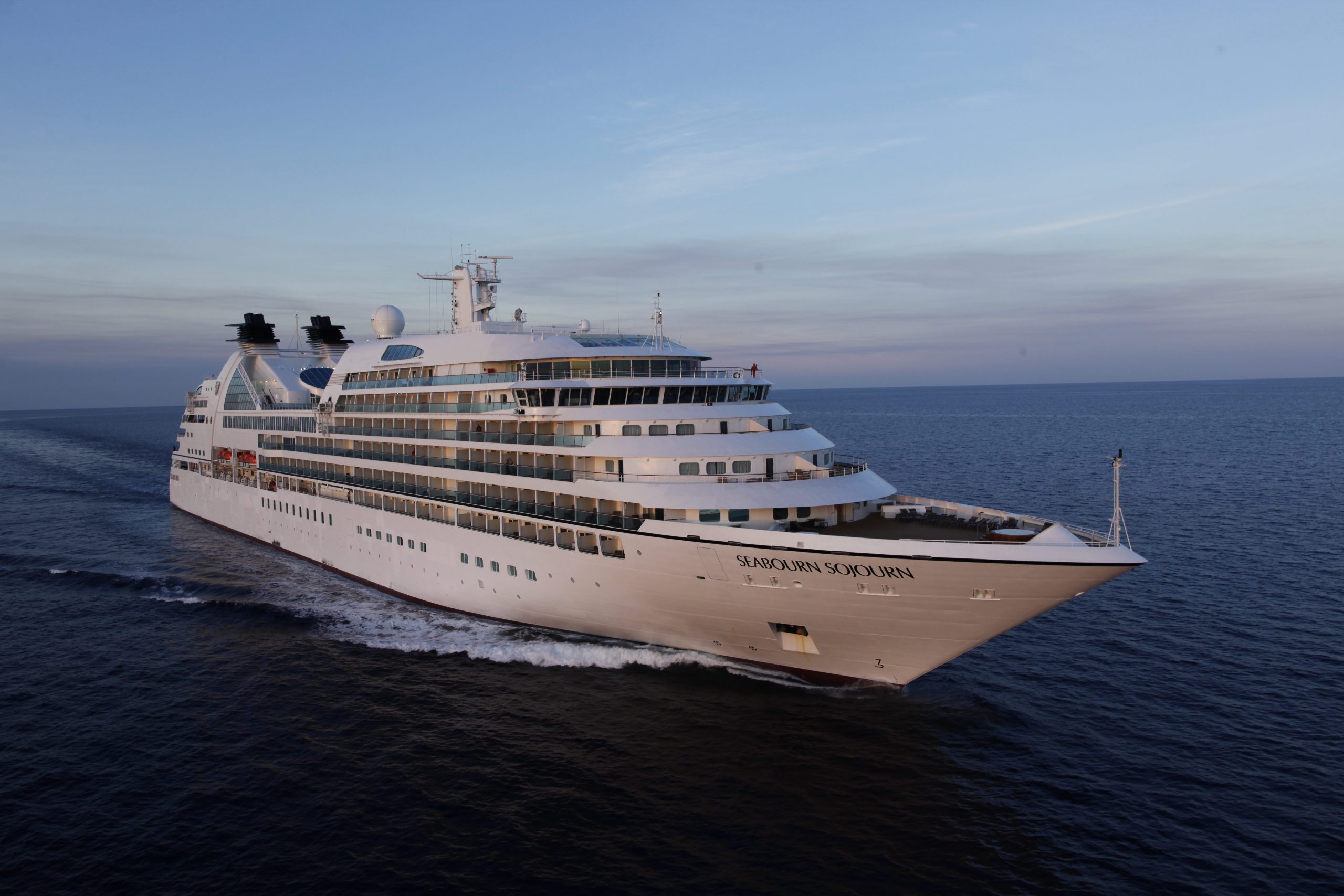 Seabourn, the world’s finest ultra-luxury travel experience, sets sail on the 146-day World Cruise: Extraordinary Destinations aboard Seabourn Sojourn in January 2020 and is honoured to host a variety of prominent speakers on board. A line-up of distinguished luminaries and intriguing personalities are set to join the World Cruise as part of Seabourn Conversations, the line’s enduringly popular onboard enrichment program designed to enlighten and entertain guests.

“Our 146-day World Cruise offers plenty of time to present a diverse line-up of engaging personalities and experts to inspire and inform our guests as they travel around the globe,” said Chris Austin, Seabourn’s senior vice president of Global Marketing & Sales. “Seabourn Conversations offers unique opportunities for those onboard to meet and mingle with prominent people who have impressive knowledge and personal experiences to share.”

The World Cruise is set to depart Miami on January 4, 2020, and will conclude in San Francisco on May 28, with 62 ports of call in 36 countries on five continents in between. Speakers scheduled for the Seabourn Conversations program aboard the World Cruise include:

• Professor Brian Ford (January 4-15, Miami to Barbados) – An internationally renowned research biologist and broadcaster, and widely published author, Ford has impressed Seabourn guests with his grasp of an extraordinary variety of topics. His revolutionary discoveries range from blood coagulation to the intelligence of microbes to the science of autumn leaves.

• John O Creighton (January 4-15, Miami to Barbados) – “JO” was one of the “35 New Guys” – a.k.a., astronaut class eight – the first group of astronaut candidates for U.S. Space Shuttle missions. He was pilot or commander of three missions aboard Discovery and Atlantis, spent more than 16 days in space, and worked closely serving with NASA as lead CAPCOM for four space shuttle flights.

• Lord Digby Jones (January 16-24, Bridgetown to Dakar) – Born over a corner store within a spanner’s throw of the Austin car factory in Birmingham, UK, Jones learned the rudiments of small business helping his parents in the shop. He has come a long way since, from serving as Director-General of the Confederation of British Industry to being knighted in 2005. Digby has written two books: Fixing Britain and Fixing Business, while commentating regularly on politics and business affairs all over the world.

• Adama Bah (January 22-26, Cape Verde to Banjul) – A hotelier for 25 years, Bah has spent the past two-plus decades promoting tourism in West Africa, including as Chairman of the Director Institute of Travel and Tourism of Gambia. Bah recently ran for mayor of Kanifing, the biggest municipality in Gambia, and also heads the International Centre for Responsible Tourism in West Africa.

• Tiiu Luuk (January 26-February 11, Banjul to Cape Town) – A West Africa specialist, Luuk fell for Africa as a foreign correspondent for ABC News, with assignments from filming wildlife in Kruger National Park to reporting on the end of apartheid in South Africa. More recently, Luuk has made her living as a naturalist and enrichment lecturer on cruise ships and on land, covering territory from Cairo to Cape Town to Marrakech.

• Robin Binckes (February 7-16, Walvis Bay to Richards Bay) – A South African historian passionate about all aspects of his country, Binckes’s wide-ranging career has spanned public relations, fishing, food retailing, and corporate management. Inspired by the art of storytelling, Binckes specialises in historical tours and conducts experiential tours and talks for companies and learning institutions focused on diversity and transformation.

• Sir Alan Collins (February 11-March 6, Cape Town to Male) – A veteran of high-ranking posts in the British Diplomatic Service, Collins has represented Britain all over the world in various capacities, including as Director-General, Trade & Investment USA; Ambassador to the Philippines; Deputy Ambassador to Ethiopia; and High Commissioner to Singapore, where he organised the 2006 State Visit by Her Majesty the Queen.

• Zelda La Grange (February 12-15, Cape Town to Durban) – A former private secretary to Nelson Mandela, the first post-apartheid President of South Africa, La Grange was a founding staff member of the Nelson Mandela Foundation. She’ll have much to share about her experiences in her first appearance in the Seabourn Conversations program.

• Anton Swarts (February 15-19, Durban to Ilha de Mocambique) – One of the senior winemakers of Spier Wines of South Africa, Swarts was designated as a top taster in the country’s Wine Tasting Championships from 2013 to 2017, and was part of the South African Team that went to France to take part in the World Blind Tasting Championship.

• Richard Stone (February 25-March 6, Mombasa to Male) – The Royal Portrait Painter for four decades, Stone has captured most members of the Royal Family on canvas. Starting at 22, he was the youngest Royal portrait artist since 21-year-old Sir Thomas Lawrence in the 1700s. Talented and determined, Stone’s portrait of Queen Elizabeth II, unveiled at the National Portrait Gallery in 1992, is his most famous work.

• Hari Nayak (March 11-17, Chennai to Phuket) – Known globally as a pioneer of modern Indian cuisine, Chef Nayak’s vision is to bring Indian culture and cuisine to the forefront of the global culinary map. Tapping his own western cooking skills and deep-rooted Indian traditions, Nayak has written six cookbooks and consulted at numerous restaurants.

• Lynne Cox (March 17-25, Phuket to Bangkok) – A long-distance open-water swimmer, motivational speaker and best-selling author, Cox has been setting world records and opening borders for over 35 years, while contributing to medical research and supporting environmental issues. Best known for opening the border between the U.S. and the Soviet Union with a 1987 swim across the Bering Strait, Cox twice held the overall record for the fastest crossing of the English Channel.

• Dr. Lawrence Blair (April 2-12, Hong Kong to Bali) – An explorer and anthropologist, Blair has spent the past 35 years exploring and making films in Indonesia. He was the writer, presenter and co-producer (along with his late brother Lorne) of the 1988 Emmy Award-winning series Ring of Fire and is Visiting Professor of Anthropology at the University of Southern California.

• Paul Deegan (April 2-12, Hong Kong to Benoa) – Award-winning author and veteran climber of mountainous regions on five continents, Deegan was co-leader of the first environmental expedition to Mount Everest at age 18. He returned: once to be embroiled in the greatest tragedy in the mountain’s history, and once finishing on top.

• Sir Jim McLay (April 17-28, Darwin to Sydney) – An integral player in the political landscape for New Zealand – throughout his career, Jim MClay has served as New Zealand’s Ambassador and Permanent Representative to the United Nations in New York, a New Zealand Member of Parliament as Deputy Prime Minister, Leader of the Opposition, Attorney General and Minister of Justice, among various other roles. Beyond politics, McLay chaired and served the boards of; Infrastructure New Zealand, the Trans-Tasman Business Circle, the international Board of Governors of the Honolulu-based Pacific Forum, among others.

• Alessandra Borchi (April 28-May 20, Sydney to Honolulu) – A UNESCO World Heritage specialist, Borchi has a strong passion for travel, history, and heritage, which she has put to good use for UNESCO on cultural policies, programs, and projects in France, Afghanistan, and Tanzania. Borchi has travelled all over the world, providing technical advice to local and national governments wishing to propose new sites.

• Lance Seeto (May 3-7, Noumea to Suva) – Born in China and raised in Australia, Chef Seeto has sparked a culinary renaissance across the Fiji Islands, and today is recognised as the country’s preeminent chef specialising in regional Fijian cuisine. Seeto has been rightly hailed not just for his food, but for his inspirational lessons of life, humanity, and the ancestral diet he learned from native Fijians.

• Fulton Armstrong (May 7-20, Suva to Honolulu) – Espionage always seems to be in the news, and espionage expert Armstrong has spent 15 years studying and working on it, while teaching about intelligence and foreign policy at American University in Washington, DC, and conducting training courses for Master’s Intelligence students in Spain and intelligence-related organisations in Latin America.

• Alison Wright (May 7-20, Suva to Honolulu) – Award-winning documentary photographer Wright has travelled far and wide photographing endangered cultures and people while covering issues concerning the human condition. A contributor to National Geographic, she has published 10 books including her best-selling memoir, Learning to Breathe: One Woman’s Journey of Spirit and Survival.

• Ted Libbey (May 20-28, Honolulu to San Francisco) – One of America’s most highly regarded music critics, Libbey spent 15 years as a commentator on NPR’s “Performance Today”. He has been Director of Media Arts at the National Endowment for the Arts; a music critic for The New York Times; as well as a regular pre-concert speaker at the John F. Kennedy Center for the Performing Arts in Washington, DC.

For guests who chose not to sail the entire 146-day voyage, shorter segments ranging from nine to 116 days are also available.