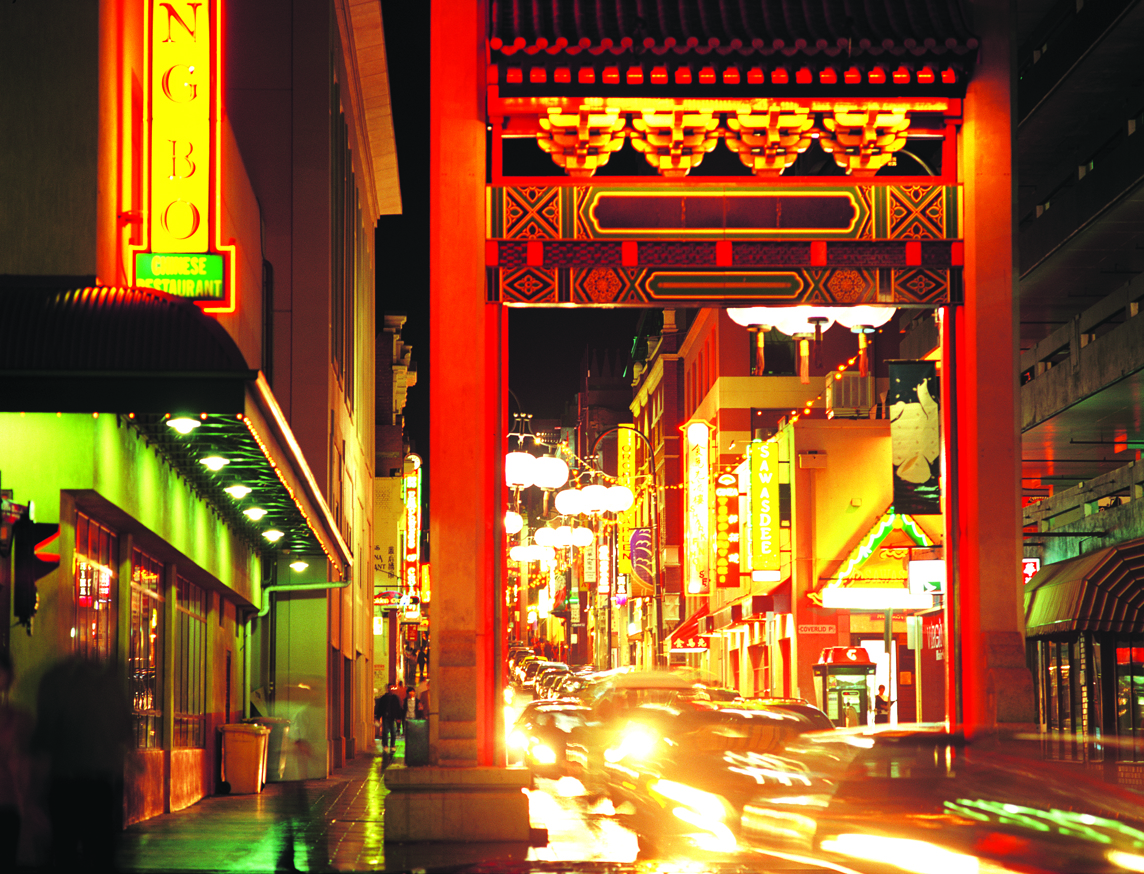 Staccato bursts of Cantonese surround you. Chinese characters in neon loop across shop fronts. Families gather around huge tables, chopsticks clicking in anticipation of a fine meal. In shops, you can buy hundred-year-old eggs, packets of green tea and embroidered slippers. You aren’t in China, however, but in Chinatown: a unique repository of culture, cuisine and imported goods.

The oldest Chinatown in the western world is right here in Australia, centred around Little Bourke Street in Melbourne. There are few original Chinese buildings left, but Chinatown has excellent restaurants and the interesting Chinese Museum, which recreates a goldfield town with cook shop, temple and a Cantonese opera theatre. In Sydney, Chinatown’s greatest asset is the Garden of Friendship, one of the best classical gardens outside China. Though miniature in size, it packs in lakes, waterfalls, pagodas and a teahouse.

Nearby Vancouver’s Chinatown is worth a visit for Sun Yat-Sen Gardens, modelled on a famous scholar’s garden in Suzhou in China. A guided tour is informative about the philosophy behind classical gardens. Across the country, Toronto’s Chinatown extends outwards from Dundas Street and Spadina Avenue, the latter decorated with dragon sculptures and mythical Chinese figures. In summer especially, locals and tourists hunt for bargain fashions, crafts and fruit and vegetables.

In New York, head down to Lower Manhattan around Mott Street, with its Buddhist temple, and you’ll find the largest Chinatown in the Americas. Though low on aesthetic appeal, this is a prime destination for eating, with some 200 restaurants offering a full range of regional Chinese cuisines. Sample Asian-style ice creams too: exotic flavours include lychee, jackfruit, red bean and green tea.

Thanks to its many movie appearances, San Francisco has America’s most famous Chinatown. The Pagoda Gates, decorated with curling dragons and red lanterns, mark its entrance. Recently arrived Asian immigrants still live here, and Chinatown is the most densely populated part of the city, full of family-owned shops and tiny restaurants. Pause at Kong Chow Temple, the oldest family association in the USA, before soaking up the neighbourhood ambience.

Europe is short on Chinatowns. The largest is in the 13th district of Paris, though it’s more of a Vietnamtown, having got its start after the Vietnam War. These days, Thais, Chinese, Cambodians and Laotians have joined the dense population along Avenue Choisy and Avenue d’Ivry. Facades are decorated in red and gold, and you can puzzle over unfamiliar items in shops, such as birds’ nests for soup, soybeans for making tofu, salted plums and dehydrated fungus.

The origins of London’s Chinatown are hazy, but it became popular after the Second World War, when British soldiers returned from the Far East with a taste for its food. Chinatown is centred on Lisle Street and pedestrian Gerrard Street; the latter has Chinese gateways and telephone boxes that resemble mini-pagodas. Few Chinese live here, but many come to eat and shop. Restaurants once dished up Anglo-Chinese food to undiscerning customers, but offerings have now improved enormously as bright young chefs dish up increasingly authentic fare from China and across Asia.

Asia itself is full of Chinatowns. Plunder Singapore’s Chinatown for souvenirs and knickknacks before visiting Thian Hok Keng Temple, where guardians with scimitars and angry eyes goggle at the threshold. Inside, candles and incense burners throw shadowy light onto carvings and sculptures. Visitors place lighted cigarettes into the outstretched hands of two statues known as the Gambling Brothers, hoping for good luck in lotteries.

In Bangkok, you’ll find Chinatown along Yaowarat Road, marked by giant ceremonial gates in red and gold, and the alleys that run off it towards the river. Bangkok’s Chinese population moved into the district in the early eighteenth century, creating a distinctive ethnic enclave. It differs from many Chinatowns in having a population entrenched for generations and generally unable to speak Chinese. The area is full of battered shops (good for textiles and gold), market stalls and old temples, the best of which is Dragon Flower Temple, with its elegant gateway, ceramic roof dragons and statues of bearded sages.

In Japan, Yokohama has one of the world’s liveliest Chinatowns – it’s a short train ride from Tokyo – and the largest in Asia. Millions of visitors annually cram into its pedestrian streets to browse for cheap fashions, children’s toys and other imports, and eat in any of 500-odd restaurants. Stop by Kantei-byo Shrine, beautifully decorated and wonderfully illuminated at night. It’s dedicated to the Chinese god of prosperity and business: no better presiding deity, surely, for all the world’s Chinatowns.